Swapping songs with Ginny Reilly and Jennifer and Dave from The Hayburners!

I’m thrilled to announce that on Friday, April 19th I’ll be hosting a Songwriters in the Round evening at the Couth Buzzard that features some amazingly talented performers!

Ginny Reilly is the “Reilly” half of famed folk duo Reilly and Maloney. With her partner, David Maloney, she has performed on the national circuit of folk music clubs from 1970 to 1990. They own a record company, Freckle Records, and recorded several albums on that label. While perhaps better known for her work with David, Ginny is skillful writer and solo performer who captivates audiences with her warmth and timeless songs. It’s really an honor to share the stage with her!

Jennifer Spector and David Tieman are also well-known as a touring duo, The Hayburners. But, as with Ginny, the also write material better suited to solo performance. For this evening, they will be primarily playing solo, but I think we can convince them to join up for a couple well-loved  Hayburners’ tunes.

I’ll have a new instrument (baritone uke!) and a few new songs, including my submission for the 2013 Tumbleweed songwriting competition. 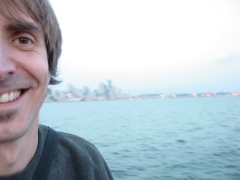 The Couth is a wonderful listening room. No amplification, just the plain beauty of voices and acoustic instruments. We promise to take you on a journey through stories, emotions and song. Hope you can join us!

What: Songwriters in the Round: Ginny Reilly, Jennifer Spector, David Tieman and Mike Buchman
When: Friday April 19, 2013

Where: the Couth Buzzard, 8310 Greenwood Ave N.
no cover, all ages, all ears!

This entry was posted in Uncategorized. Bookmark the permalink.